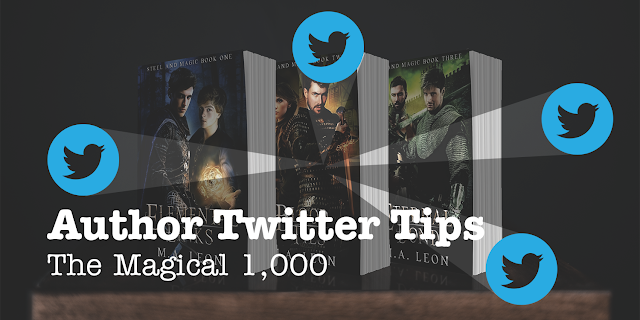 Oh my gosh, what a journey. Before you get to 1,000 followers, don't bother tweeting on your own page; no one will see it.

To start off, I casually set a goal for me to follow ten people per day. This goal was nowhere near good enough for me to take off, but at least I was growing slowly.

Then COVID-19 happened and my husband returned from his military course. That's when I actually had time to push for my magical 1,000.

Not only did I have time, but I enlisted my husband. Yes, I cheated... sorry guys. I swear, my Twitter tweets are 100% authentic these days.

My point is; he and I searched for all #WritingCommunity, #fantasy, #YAfantasy, and similar tweets. We checked them out, followed everyone who responded on there, were personable, showed that we enjoyed their comments... we engaged with people around the world who wrote all kinds of genres of books, blogs, and papers.

What really made me love Twitter that i could ask for help. This is your golden ticket. Early on, I asked for help and followers. Nothing happened. I got a few more followers and interacted with a few more people and asked again.

Magic happened. Again and again, I say Twitter is a magical place. It's magical because of the Writing Community. One wonderful supporter who had thousands of followers retweeted my tweet and asked others to support me.

It flew from there. My tweet was retweeted by his followers and then retweeted by their followers. Pretty soon, I was on the Twitter radar and had a path ahead.

A couple nights later and 16+ hours of my husband's and my time, I got to 1,000. Let the celebration commence!

1,000 is indeed a magical number on Twitter. I've heard people say 1,000 is magical, another said 1,500 is magical... the truth is, the first smooth sailing starts after 1,000. After reaching that golden number, I started getting over 100 new, generic followers a day.

And you know what? I love them all. It's so fun to see what these people post every day. Which brings me to my next point; interact.


Interact with your followers

The writing community on Twitter is great. They want to support each other and retweet your tweets; even the random tweets that don't make sense out of context. I always find those retweets amusing.

However, after 1,000 I got 100 followers a day by being a part of the community. Twitter doesn't grow on its own if you never log in: the Twitter god knows.

And by "twitter god" I mean the algorithms that Twitter has in place to put focus on the Twitter accounts that are the most involved in their platform.

In the end, make Twitter happy. Do whatever you think they'd like you to do and the algorithms will treat you well.

In celebration of your first 1,000 followers, make sure your first tweet is witty. If you're not a witty person, call your witty friend and ask for help.

My first post after reaching 1,000 followers got 132 likes and 11 retweets. To put it into perspective, I  saw a tweet from someone with 4,000+ followers who said he rarely got more than six likes on his tweets.

Thanks to this tweet, I hardly had to interact with Twitter all day to get 120+ more followers. Which was a good thing, because it was a busy day at work.

Writers lifts are great. You get to share your own work, find a bunch of people to follow, get followers in turn, and promote other authors' works. Ask people to share a link to their book or website. Make it fun and ask them to share a gif about their book's genre, along with a link. 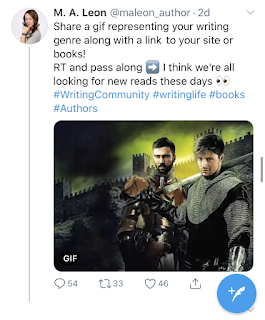 The world of writing isn't a dog-eat-dog world. If someone buys someone else's book, they're probably more likely to buy yours. The more people read, the more they want to. At least, that's how it is with the client base you need to target.

My point is: promote your fellow author. We're in this together whether you realise it now or not. Other Writing Community users and those tricky Twitter algorithms will see that you contribute to the Twitter community and will boost you in return.

If you're looking for new people to follow, open a popular #WritingCommunity tweet and scroll to the bottom. The people you haven't followed yet tend to be dumped near the end.

Persevere and don't think it's all for nothing. You have to break out of the minor-account bucket into the 1,000+ bucket for Twitter to promote you on its own.

Well, in about three days I went from 1,500 to 2,000. The time flew. Whether or not that's because 1,500 is the truly magical number, or because I posted a second #writerslift for #indieapril (yes, learn the lingo of your community), I'm still experiencing smooth sailing. In my opinion, the first 1,000 followers was still the crucial landmark to take off.

Written by M. A. Leon — Author of the Steel and Magic series
www.leonauthor.com

Popular posts from this blog

Preparing your paperback manuscript for Ingramspark with Indesign

March 26, 2021
Oh my gosh, writers. Could there please please please be one page that tells you the settings to use in InDesign to get your files approved in Ingramspark? At least, that's what I begged Google while tugging out my hair. After hours of trial and error, here are the freaking settings for InDesign exports to Ingramspark. (With details for converting your cover image with Adobe Acrobat at the end!) Your content Document units First, before you give yourself a headache looking up picas conversions online and everything, set your document's units to inches. Go to Indesign > Preferences > Units & Increments . Set the Width and height to use inches. Document bleed Go to File > Document setup . Set your bleed to the following: Bleed Top: 0.125 in Bottom: 0.125 in Inside: 0 in Outside: 0.125 in Document export Now, to the simple juice of this article: exporting your document. Go to File > Export (or [control/command]+[E]). Set the Adobe PDF Preset to [PDF/X-3:2002] . Le
1 comment
Read more

Designing your own covers with Adobe Photoshop

April 14, 2021
When I first started self publishing, I figured there was no way I'd ever design my own covers. Cover artists know so many things including: The size of cover your book will need depending on which publisher you use (KDP, Ingram, Barnes and Noble, Blurb, etc.) The colour edits and variants you'll need to get your colours printing right How to make sure the text on the back of your book is legible And so many other things. I'd swore I'd never design my own cover, until... Perusing Adobe stock images, I came across the perfect image that was exactly what I wanted for my book cover. Now, consider this: I'd already spent $350USD per book cover for the three books in my series; hired a professional designer and everything. People enjoyed them, they showed my characters well... but something was never quite right. My fault, not the artist's; she gave me exactly what I asked for. Was it crazy to re-start on my own and scrap that $1,000+ I'd spent on cover art? Ini
Post a Comment
Read more

March 05, 2020
Well, here I am, one year after publishing my first book. What's changed? I'm going throw you the candy and then the broccoli in the next two paragraphs; hold onto your seatbelt. What makes me feel qualified for writing this blog is that, since publishing my book, I've gotten a full-time job in marketing. I've been getting on-on-one, customised advice from my colleagues. Since publishing my first book, Elemental Links, I've read dozens of blogs on how to market my book. In this blog, I'm putting that information together for you. As for the broccoli, my book hasn't taken off yet. The reviews are promising. One professional reviewer loved my sequel so much that she asked if she could let her thirteen-year-old son read it. Out of all the books she's read, she wanted to pass along mine. It was very flattering. However, publishing your book is a three-year haul. At least. Be prepared. I've given out hundreds of free copies of my books. Some blo
Post a Comment
Read more

m.a.leonauthor
My name is Melanie; author of the Steel and Magic series. I'm an author by night and marketing professional by day. My job is primarily writing company blogs plus creating marketing graphics. By putting them together, I give you my self-publishing blog!